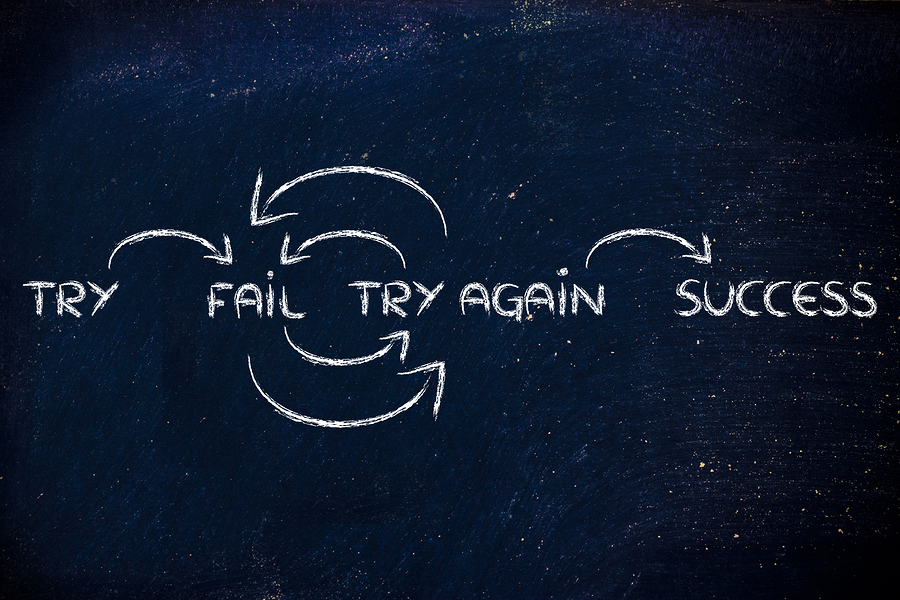 “Success is walking from failure to failure with no loss of enthusiasm.”
~Winston Churchill

I debriefed a 360° feedback assessment this morning and it was tough. The feedback itself was a bit tough, and my client took it very hard.

Now, I knew that the feedback was not the harshest I’ve ever delivered, and I knew – from the little bit I knew of this client – that the feedback would land hard on her. She had gotten feedback specifically about how she tried too hard and would allow no room for mistakes or missteps, and the feedback itself felt like a huge mistake and misstep to her.

All I wanted her to hear, and to know, was first, that the feedback was not as tough as she was taking it and second, that she had to learn to allow herself to fail, and perhaps fail again.

Because stuff will happen. Setbacks will occur. Missteps and mistakes will abound. We have to be willing to never give up hope and to always keep learning and growing and trying. To not quit. To not beat ourselves for what’s gone wrong. And to instead move forward.

To learn how to fail successfully, contact Robyn at rmcleod@chatsworthconsulting.com.

How have you helped the team member in your organization who, like the cow, undoes all the good by behaving badly? bit.ly/3LQEZV9 pic.twitter.com/a1ef…

By helping them to see the impact of their behavior and how that behavior is not in line with the expectations you have of those in their position, you can pave the way for behavior change and improvement. bit.ly/3LQEZV9

My mother-in-law had a saying about people who could be really great and then would do something that totally negated the good that they did. “He’s like a cow that gives a good bucket of milk – and then kicks it over,” she would say. bit.ly/3LQEZV9 pic.twitter.com/70nv…

Getting on the same page when words and meanings differ ow.ly/WjPt50KM3Tm pic.twitter.com/E3hx…

About 7 hours ago from Thoughtful Leaders's Twitter via Hootsuite Inc.