Failure is a good thing 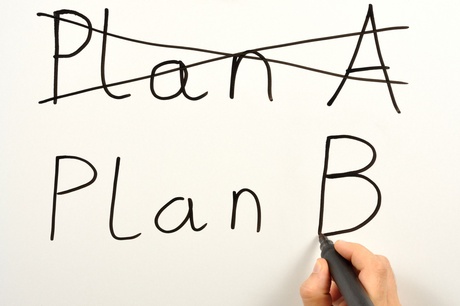 I have a coaching client (I’ll call her Jane) who convinced me today that failure can truly be a good thing.

We were catching up during our session this morning, and Jane related to me a few episodes where she had “failed,” and where those failures worked out in the long run and gave her much more than she might have received had she “succeeded.”

First she related how on Sunday evening, as she watched the Eagles game, she actively decided not to check her BlackBerry for emails. Jane and I have been working on helping her be less tied to her BlackBerry, as a conscious leadership decision, for a few months. She sat on the couch, forgetting her BlackBerry, and then heard it ring, but reasoned that no one ever called her on that phone, and so let that go as well. Then as she was watching the game, her home phone rang, and the caller ID showed that it was her boss.

Turns out there really was a work crisis…and although Jane was at first consumed with guilt that she “should” have been on her BlackBerry and known what was happening, it was totally fine with her boss that it had taken a call to her home phone to find her. And the crisis was handled, just as well as if she’d had the BlackBerry attached to her constantly – as she used to. What a learning!

Jane also shared with me how she broke her diet over the holidays. She has lost a huge amount of weight over the past year, and went into the holidays with the best intentions, but simply stepped away from her new good habits and “failed.” She ate everything in front of her and completely avoided the gym…for three weeks…and gained weight – enough to upset anyone. But Jane looked at me, totally happily, and announced that the guilt had been extremely short-lived, the step away from the diet had been fun and, unlike times in the past, she had stepped back up with ease to resume her healthy habits. I smiled as she related that much of the gained weight was lost, but smiled even bigger as she told me how she realized that what she did was fine. ”The world didn’t end,” Jane said. “My diet didn’t end, and even though I “failed,” I wasn’t a failure. I feel like a success.”

As William Brown once said, “Failure is an event, never a person.” And apparently “failure” can teach us a great deal…it can be a good thing.

Do you agree? Can “failure” be a good thing? We’d love to know where you have “failed” and what it has taught you.
Click here to leave a comment.

About 5 hours ago from Thoughtful Leaders's Twitter via Buffer

We get upset at different things, to different degrees. If we can remember this, then we can cool down when we’re the one past our boiling point & we can be understanding when the person we’re calmly trying to talk with has gone off the deep-end of anger bit.ly/3iOzxFT pic.twitter.com/lsMO…

We all have different boiling points. Some people can handle way more than others, and some people seem to boil at what would feel like a simmer to me. bit.ly/3iOzxFT pic.twitter.com/T38A…