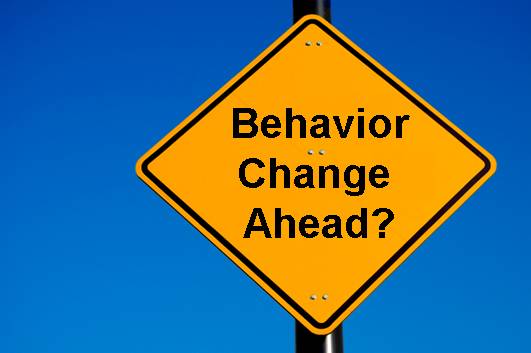 As I drove my daughter to school recently I saw my jogging partner walking with her children to school. She mentioned several weeks ago that she wanted to take more opportunities to exercise and to encourage her children to be more active, so I was happy to see her putting her words into action by walking the mile and a half to school rather than driving. I shouted a few words of encouragement as we drove past and she smiled.

Later she told me about the reactions she received to her decision to walk rather than drive. When she told her son and daughter the night before, they wondered aloud why they were being punished. “It’s so far!” they said. “It will take forever!” they complained. As other parents drove by, they asked if everything was OK. “Did your car break down?” they asked. “Do you need a lift?”

The reactions to her break in routine, her change in expected behavior, brought to mind for me the reactions that you can encounter when you practice new skills or adopt changed behaviors at work. Often colleagues are surprised, put off, or confused by the “new you.” Recently a coaching client of mine began to focus on not micromanaging, in reaction to feedback she had received. She no longer peppered her team with questions about the status of their work nor did she give explicit directions for completing the assignments she gave them. After a few days, one brave manager stopped by her office. “Is everything OK?” he asked. “Rumor is you are leaving the group.” My client assured her colleague that she was not going anywhere and was in fact acting on the feedback she had received to be less directive and less of a micromanager. It took several months before her team was convinced that she was truly trying to change and would not revert back to her old ways.

I recall the first time I received 360-degree feedback. I was surprised to hear that my direct reports felt that I did not acknowledge their efforts enough. As someone who does not require much verbal recognition, I was not attuned to the different needs of some of my direct reports who wanted (and deserved) acknowledgment and recognition from me. As I focused on this area of development, I found that the initial reactions to my giving recognition were surprise and suspicion. I’m sure my initial awkward attempts at acknowledgment were probably not seen as sincere. But as I incorporated regular acknowledgment and recognition into my one-on-one discussions, group meetings, and written communications, it became easier for me and more believable to my team.

If you have a goal for changing a behavior, adopting a new skill, or dropping a bad habit, prepare yourself for the reactions of others and don’t be discouraged. One of the best ways to help others accept and embrace your new behavior is to be transparent. Let others know what you are doing. If my client had told her team that she was working to change her behavior, and why, they would have been more receptive and understanding when the “new her” appeared. When you tell people what you are working on, they will be less surprised at your changed behavior and, as a bonus, they can help support and encourage you.

Changing behavior and breaking habits is hard. And when we get negative or disbelieving reactions to our new ways it’s easy to give up. Stick to it and you’ll be the one surprised by the results. My friend’s children now look forward to their morning walk to school. They now think it’s a fun treat, not punishment.

Tell us about reactions you have experienced to changed behaviors and how you dealt with them.

For help in changing your behavior, contact Robyn at rmcleod@chatsworthconsulting.com.

Many of us learn that to survive, we must make others happy We twist ourselves for what they want We needed to do this to survive But not anymore Today I will like, love and choose myself - first, most, and always How about you? #tothemoonandback #thoughtfulleaders #IGotOut pic.twitter.com/IHis…

About 3 hours ago from Thoughtful Leaders's Twitter via Buffer

How peace of mind can make you a better leader ow.ly/ofJm50J5JQf pic.twitter.com/uFpo…

I guess I have an amazing capacity for joy I know I cried when my therapist said that to me My latest blog post - buff.ly/3wnUsWI - Your capacity for joy is amazing, considering the trauma you experienced #tothemoonandback #thoughtfulleaders #IGotOut pic.twitter.com/fYFi…